2014 would be the year when I finally went to Spain!
After we were in Gran Canaria a couple of year back, mi novio was like "the Canary Islands belong to Spain, so now you've been to Spain".. How about NO! That is definitely not the same! That's like saying you've been to the Faroe Islands when you've only been to Denmark (just because it's in the same Kingdom).. Denmark and the Faroe Islands are definitely not the same - just like Gran Canaria and Spain are not the same!! Oh wait, I'm kinda getting of track here.... Hehe

So, in Mayo 2014 we went to Spain for 2 weeks and it was a really great trip! In the first week the temperature was crazy... Seriously, at one point a sign said 46°C, which I kinda refuse to believe cause I didn't faint or anything; I think that the thermostat was faulty or something, but on a different day it said 42°C and that is more believable! If you stay in the shade as much as possible, then the heat is not too bad... The longest I think I stayed in the sun on a day like that was 10-15 mins and that was plenty - I was already starting to get lightheaded...

The second week wasn't as warm, and in the evening it was indeed too cold if you wore shorts (which Francisco did and got freezing cold).. Uh look at me, saying that it wasn't that warm, when it was around 30 degrees.. I guess you could say that I was getting kinda used to the heat, but honestly I think it's more the difference in the temperature from the first week to the next, that made it feel so cold.. Also, I am used to feeling unbearably warm when it's "only" 25 degrees here in the North, so I'm sure that the heat feels different up here,,, maybe it's to do with the humidity or something like that ?

One day after siesta (yes, that was every afternoon! I found it to be a waste of time and preferred to sit outside in the shade and read some Darkly Dreaming Dexter; however sleep was in the air and I wasn't always able to stay awake through siesta..) I opened the windows and balcony door to get some fresh air in - cause that's what you do after sleeping, right? At least that's what I always do... Well, a little while later Francisco and his brother were complaining that it was so warm inside, and were like "Who opened the windows???".. So apparently I let the heat into the house, which is a big NoNo when the sun is out... Oops.. What a topsy-turvy world..

Most people in Spain, or in this case the south of Spain, are tanned and brown eyes,, so it felt a little like I was sticking out with my pale skin and blue eyes.. Indeed I got a little bit of a tan - without getting burnt - and was feeling quite nice about it! That was UNTIL we went to the beach at Chipiona (or Chipirona as I called it; but that was only because we had eaten Chipirones in Chipiona, so can you really blame me for mixing them up?). We went to papá's property there and the neighbour came over to greet us... You should have seen the look on her face, it was a combination of being appalled and seeing a ghost, and she pointed at me and said: "Ay, que blanca!" (that pale/so pale)... If only she had seen me before my tan, then maybe she would have fainted.. Hehehe! Well, at least I have an excuse.. I'm from the North.. :p

At least I now know that I can stand some of the heat, and as mi novio pointed out several times: "Vanja, it's sooo good that you get to experience this heat wave and know that you can deal with it. Also I think that you look so happy here; plus your hair looks so much nicer and shinier.." Hm... I think he might be up to something (to those who can't read between the lines, he was trying to hint that we should live in Spain)! Hehe
But indeed, the heat was nice; or rather when it was around 30 degrees and no more, then it was nice! :)

The main purpose of the trip was to see where mi novio is from and to meet his family and friends! We definitely saw loads of people and they were all really REALLY great! Some sightseeing was squeezed in there, but indeed I enjoyed visiting people more - although I have to say that Sevilla is a beautiful city and Los Palacios y Villafranca (where he is from, AKA "el pueblo") is really lovely as well :) I especially love the fact, that even though the population of el pueblo is 38,000ish people, it still only took us 15-20 minutes to walk from one end of the city to the other! My theory is that there must be around 5-8 people living in each house! Indeed the houses are packed together so closely that there is basically no space in between them! That has to be how they fit 79% of the Faroese population into such a small city! ;) 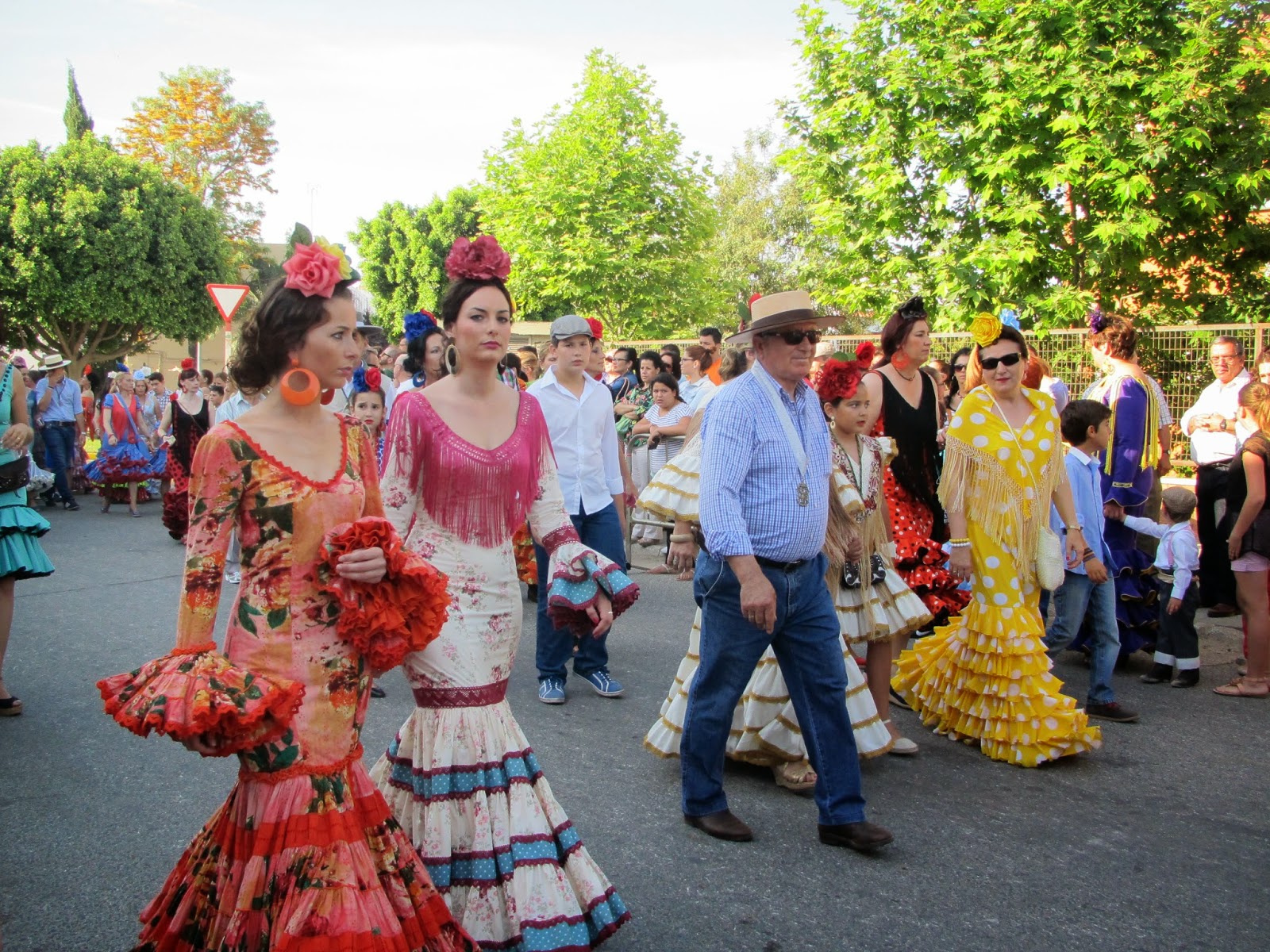 On one of the days, the whole family  (mamá, papá, Francisco's brother, brother's fiance, Francisco and I) went on a day-trip to Aracena! It was a lovely little town, where we went to la Gruta de las Maravillas - this grotto with stalactites (the English word for it according to Google translate; I only know it in Danish as "drypsten") and then the jamón museum!! :) Afterwards we went out for a meal, went to the castle and bought some nice souvenirs. Papá bought me a necklace with my birthstone and Francisco bought us a beautiful pot for our plant Pancho (a cactus back in Edinburgh) :)

Enough about all that.. How did I manage with the language you ask?? To be honest, it was a bit of a challenge at times...
I barely understand anything that mamá says, but papá speaks louder and slower, that I can almost always understand what he means... Okay, sometimes I'm completely clueless about what he means, but I would say that I understand him 65% of the time.. It might also be because he uses hand gestures a bit as well when he is talking.. An example is when I met one of the neighbours and there was only me, papá and her there. I didn't know who she was, and she was trying to tell me something... Papá must have seen the confused look on my face, cause he repeated what she said and from picking up some of the words, I understood that she was a neighbour that lives next to Pedro's house (or further down the road, but at least he was pointing to the right, so it was there somewhere).. The imperative word was "vecina" which I know means neighbour (female).

Going out with friends was also nice - especially because they told me stories about Francisco, from when he was young :)) Luckily some of his friends (and cousins) could speak English, cause otherwise it would have been difficult to get to know any of them... It was very nice and refreshing to see Francisco in his natural environment and being among people that know him the way I do - I loved every moment of it! I can't wait till next time I see them, and I get to hear more stories! Muahahaha :)))

To finish off I have to mention the food.. I SERIOUSLY love jamón... I mean really LOVE jamón! I couldn't get enough... At one point I took the knife and was trying to cut a piece off it, but the knife slipped and cut my finger - that's how much I love it, that I would risk loosing a finger! Mmmm...
I tried a lot of other local dishes, for example caracoles and cabrillas (snails, small ones and bigger ones), salmorejo, gazpacho, pringá, puchero and other things that I don't know the names of.. I liked everything that mamá cooked, except one of the dishes - which I still ate out of politeness, but then felt sick afterwards... She saw right through me, cause even though I lied and said that I liked it, she knew that I didn't... My most favourite dish was this Aubergine bake - OMG it was good!! I've tried making it back here in Edinburgh, and even though it's nice, it's still not the same..... Uh! And not to forget the pestiños! - This pastry that's soaked in honey... My mouth seriously waters just thinking about them...
Of course we also had to have Churros con chocolate for breakfast one of the days, and it was total bliss! I accidentally spilled my glass of chocolate all over the table and road (were sitting outside the cafeteria) - typical clumsy me, but Francisco was nice enough to get me a new one! :)


I had an absolutely lovely trip and everyone and everything was so nice! I honestly can't wait for our next holiday to Los Palacios, which will be in April 2015, when Francisco's brother is getting married!! :)
Posted by Vanja S. at 18:30